In 1866, the Province of Canada was under threat of attack from the Fenians, and it was against this backdrop that the 34th (Ontario) Battalion of Infantry was formed.  In 150 years, they have seen two World Wars and numerous other military and peacekeeping missions, and at the March Speaker Series, highlights from that history was shared.  Rod Henderson, author of the upcoming book Fidelis et Paratus: The History of the Ontario Regiment, 1866-2016, spoke about the early days of the Regiment, its involvement in World War I and World War II, and current activities of one of the oldest continuously serving regiments in Canada and one of the senior armoured regiments.

Copies of the book can be pre-ordered from the Ontario Regiment Museum’s Website. 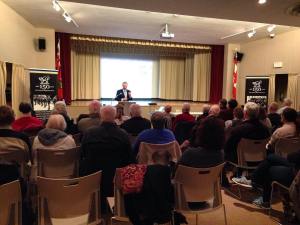 Founded in 1957, The Oshawa Historical Society (OHS) is an affiliate of the Ontario Historical Society. The purpose of the (OHS) is to bring together those individuals interested in the diverse historical aspects of Oshawa and to research, record, retain, preserve, and present historical information pertaining to the Oshawa area.

The Oshawa Museum is situated on the traditional territory and treaty lands of the Mississaugas of Scugog Island First Nation. Our work on these lands acknowledges the signatory communities of the Williams Treaties, as well as the Mississauga Nation and other members of the broader Indigenous community, for their resilience, and their longstanding contributions to the area now known as the Durham region.