A big thank you to all of our members and non-members who attended last night’s OHS Speaker Series, featuring the Foundation for Building Sustainable Communities sharing tales of Oshawa’s involvement in the War of 1812.  The stories were wonderful, and the display they provided was really interesting!  For more information on their project, visit 1812waroshawa.com

The Oshawa Community Museum has its own tie to the War of 1812.  Thomas Henry of our Henry House was a War of 1812 veteran.  From the Memoir of Rev. Thomas Henry, we know that Elder Thomas was involved in the war in two different capacities.  At the start of the war, Thomas was hired by Judge Powell to work as his attendant.  In this role, he travelled around the province assisting the Judge.  The following year, he was employed by Powell’s successor, Judge Campbell.  He once again acted as the Judge’s assistant and travelled the province.

In 1814, just as the war was coming to an end, Thomas was hired as a substitute in the army.  He remained in this position until the war ended.  After which, he worked as part of the Garrison who guarded American prisoners as they were being transported from Toronto (York) to Kingston and from Fort George to Niagara. 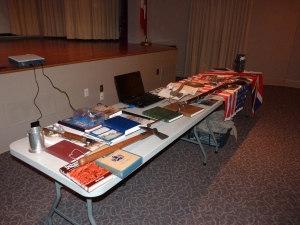 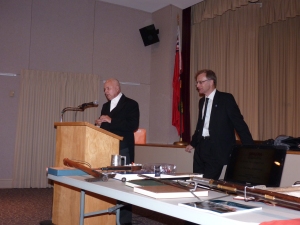 Glenn McKnight and Robert T. Bell presenting on Oshawa and the War of 1812 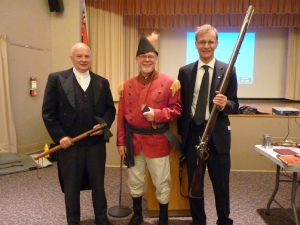 OHS President Merle Cole (centre) with Glenn and Bob of FBSC
They all got into the spirit of the evening!

Founded in 1957, The Oshawa Historical Society (OHS) is an affiliate of the Ontario Historical Society. The purpose of the (OHS) is to bring together those individuals interested in the diverse historical aspects of Oshawa and to research, record, retain, preserve, and present historical information pertaining to the Oshawa area.

The Oshawa Museum is situated on the traditional territory and treaty lands of the Mississaugas of Scugog Island First Nation. Our work on these lands acknowledges the signatory communities of the Williams Treaties, as well as the Mississauga Nation and other members of the broader Indigenous community, for their resilience, and their longstanding contributions to the area now known as the Durham region.